A year and a half before Ambrose Burnside was in command of the entire Army of the Potomac, he was Colonel of the Second Brigade under Colonel David Hunter in the Second Division at the first battle of Manassas. The brigade consisted of the 71st New York, 2nd New Hampshire, 1st Rhode Island, and 2nd Rhode Island. They never came close to the heavy fighting on Henry House Hill, but brought up the rear to the north near Bull Run. Within this last regiment were two soldiers by the names of Elisha Hunt Rhodes and Samuel J. English. This is their account of the battle and subsequent “skedaddle”. 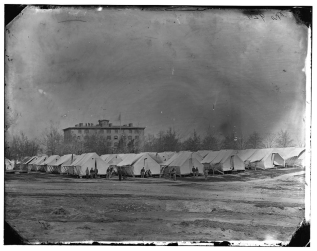 Camp life in Washington before the battle had been something akin to pleasant for Elisha Hunt Rhodes (19) and his 2nd Rhode Island Regiment. Given the rank of corporal, he was one step above a private and given specific responsibilities over the men. According to his wartime diary, they were daily fed “plum pudding, gingerbread and milk and other good things”. Their Sibley tents were “very comfortable and we feel quite at home.”

Drills and night watch duty were a given, but Rhodes claimed, “I do not complain of this for I want to know the whole duty of a soldier.” He’d soon learn of that duty. The order came on July 16th that they were moving out. Rhodes almost didn’t get to go and would have been stuck looking after the tents and Company property with another guard while the rest of his regiment went off to war. Captain Steere said he was “too slight built to march”. After some insisting, the captain gave in and gave the assignment to another corporal.

On the march to Fairfax and Manassas, Rhodes and the rest of his regiment were without tents and awoke “a little stiff and with my clothes wet with dew”. The march on July 17th seemed rather laid-back as they marched in single ranks with several paces between the men. Rhodes writes, “I never saw black berries more plenty. We stopped and ate what we wanted and then moved on.”

Samuel English had this to say in a letter home to his mother after the battle, regarding the state in which they found Fairfax. “As our company arrived the streets presented the scene of the wildest confusion: old negroes running around, some laughing, some crying and some swearing at a fearful rate. The streets were strewn with the knapsacks, haversacks, canteens, blankets, shirts and most every article pertaining to camp life. The houses were deserted and in some places the tables were set for dinner and coffee warm on the stove.”
The soldiers were given orders not to take anything or rifle through the houses. A few did anyway. Rhodes, however, commandeered a rooster and tried to boil it. “But he was tough, and we had to give it up. And I lay down near a fence for a little sleep, satisfied that I knew very little about boiling roosters.”

On July 20th, Rhodes and English were drawing ever closer to Manassas and created a makeshift camp from the pines and cedar boughs, dubbing it “Bush Camp”.

At 2am the following morning, the regiment was ordered up and to march down the hill toward Centreville to help clear the way through the dense foliage that blocked the army’s advancement. The order was given to Colonel Hunter’s division to cross the river and get between Manassas Junction and the enemy army. The 2nd Rhode Island was to act as skirmishers, going ahead to poke and engage in some fire to test the enemy’s location and strength. With about 7,000 men and a battery of six rifled cannons, along with two howitzers under the 71st New York, they were well equipped for the task.

A distant gun sounded sometime in the early morning, but according to Rhodes, “we did not realize that our first battle was so near at hand.” This was plain in the lighthearted joking and laughter from the 2nd Rhode Island as they picked more berries in the early morning on their way to Bull Run. One man, while trying to climb over a fence, fell on his bayonet and broke it in two, which gave the soldiers something else to find humor in before the real fighting began.

The 2nd Rhode Island came to a clearing skirted by woods and were “saluted with a volley of musketry, which, however was fired so high that all the bullets went over our heads.” Five other companies with the 2nd Rhode Island engaged the Confederates who were firing behind a fence in the dense woods to the south.

Samuel English recalls, “… a perfect hail storm of bullets, round shot and shell was poured upon us, tearing through our ranks and scattering death and confusion everywhere; but with a yell and a roar we charged upon them driving them again into the woods with fearful loss.”

In the tumult of their first battle, Rhodes played a role in the final moments of Colonel John S. Slocum. “Colonel Slocum had crossed a rail fence in our line and had advanced nearer to the brow of the hill than the line occupied by the Regiment. As he returned and was in the act of climbing the fence, he fell on the side next to the Regiment. I, being the nearest man to him at the time, raised him up, but was unable to lift him from the ground. Calling for help, Private (Thomas) Parker dropped his gun and came to my assistance. Together we bore him to a small house of the left of the line and laying him upon the floor, sent for Colonel Burnside, Surgeon Francis L. Wheaton and Chaplain Thordike Jameson, who all arrived in a few moments, a lull in the fight having occurred. Chaplain August Woodbury and Assistant Surgeon James Harris, of the Rhode Island Detached Militia were already in attendance. With the sponge, from my cap, I washed the blood from his head and found that the bullet had ploughed a furrow from rear to front through the top of his head, but had not lodged. His ankle was also injured, having wounds upon it. While unable to speak, he yet appeared conscious, and at my request would move his hand from his wounded head. When it was decided to place the Colonel in an ambulance, I took the door from its hinges with my gun screw driver, and assisted to carrying him on this door to the ambulance.”

All the while, the rest of the companies were holding back the enemy by themselves for half an hour. This put 1100 soldiers against almost 7,000 or 8,000. A prisoner that was taken later during this engagement claimed that they thought they were contending with a force that was nearly 20 or 30 thousand instead, judging by all the noise they made going into the fight.

Just in time, the 1st Rhode Island, 71st New York, and 2nd New Hampshire regiments came to back them up. 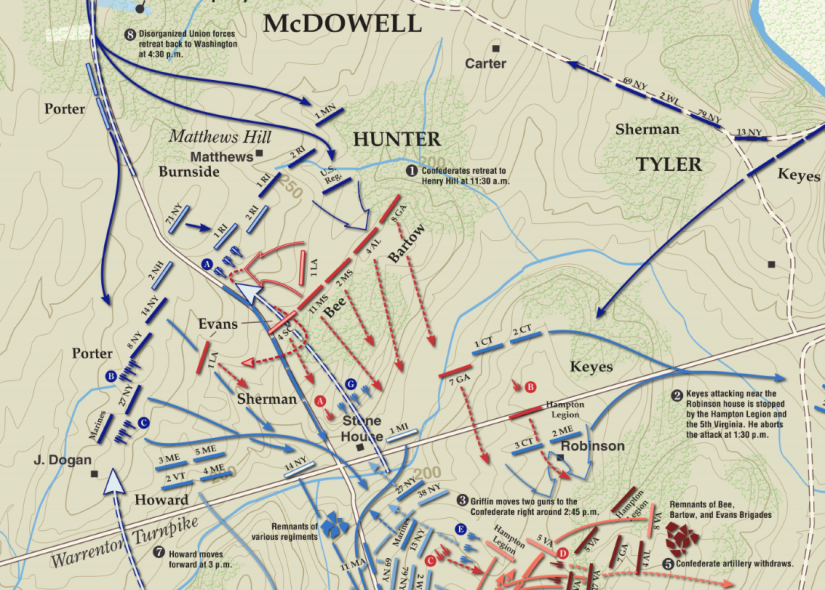 English wrote to his mother, “I saw a bomb shell strike a man in the breast and literally tear him to pieces. I passed the farm house which had been appropriated for a hospital and the groans of the wounded and dying were horrible… the bodies of the dead and dying were actually three or four deep, while in the woods where the desperate struggle had taken place between the U.S Marines and the Louisiana Zouaves, the trees were spattered with blood and the ground strewn with dead bodies.”

When the final order was given for the army to retreat, Rhodes said, “The Rebels followed us for a short distance, shelling our rear, and then we pursued our march unmolested until we reached the vicinity of the bridge that crosses Cub Run. Here a Rebel battery opened upon us from a corner of the woods, and the stampede commenced.”

English: “The R.I regiments, the New York 71st, and the New Hampshire 2nd were drawn into a line to cover the retreat, but an officer galloped wildly into the column crying the enemy is upon us, and off they started like a flock of sheep every man for himself and the devil take the hindermost; while the rebels’ shot and shell fell like rain among our exhausted troops.”

A document found with Rhodes’ notes read about this retreat, “It was utterly impossible to carry on the battle successfully under such circumstances and against such odds, and when the enemy, reinforced by Johnson, charged upon our men, the Regulars, Cavalry, and all the troops retreated precipitately in the greatest confusion under a perfect avalanche of shells. The panic stricken crowd cut loose the horses, and mounting them fled from the field.”

The disaster that befell the retreating army at the bridge over Cub Run was unanimously regarded as a scene of utter chaos. Baggage wagons overturned, men crowding and clamoring to get across while soldiers were mowed down by artillery and musket fire from the Confederates. As English was crossing the bridge on his hands and knees, he witnessed Captain Smith being struck by a round shot and nearly severed in two. Rhodes, along with many other soldiers and officers, took to the river instead and crossed its waist-deep waters with their guns lifted, rather than brave the bridge itself.

Union forces fled from Centreville and Fairfax, all the way to Washington without stopping to rest for more than half an hour at most. English recalled, “The last five miles of that march was perfect misery, none of us having scarcely strength to put one foot before the other, but I tell you the cheers we received going through the streets of Washington seemed to put new life into the men for they rallied and marched to our camps and every man dropped on the ground and in one moment the greater part of them were asleep.”

One of them was Rhodes. “I suffered untold horrors from thirst and fatigue but struggled on, clinging to my gun and cartridge box. Many times I sat down in the mud determined to go no further, and willing to die to end my misery. But soon a friend would pass and urge me to make another effort, and I would stagger on a mile further… About eight o’clock I reached Fort Runyon, near Long Bridge, and giving my gun to an officer who was collecting them, I entered a tent and was soon asleep.”

In all, the casualties for the 2nd Rhode Island were 93 killed, wounded and missing. Of that were four officers: Colonel John S. Slocum (whom Rhodes was with), Major Sullivan Ballou, Captain Levi Tower, and Captain S. James Smith (whom English was with). From their company, Company D, five killed and one missing. In the adjoining notes sums up a professional opinion of the battle. “Had the enemy been more active and brave, few of our men would have escaped to tell the sad tale of the fight.”