The role women played can’t be ignored. Whether it was in the home or on the battlefields themselves, the ladies of the Union and the Confederacy made a difference in the lives of the soldiers who fought for it. Manassas was no exception.

James Ricketts, the famed artillery commander who fired upon Henry House and was overtaken by the Virginia regiment clad in blue, was shot four times at the battle of Manassas. No one could have been more devastated than his wife, Fanny.

Frances “Fanny” Lawrence was born in Elizabeth New Jersey, the daughter of J Sharpe Lawrence. She married James in January of 1856, who happened to be a distant cousin on her mother’s side. She wasn’t James’ first wife, but she was no less devoted and traveled with him everywhere he went while under military orders. She accompanied him to Alexandria in the spring of 1861 when he was given his command over the artillery unit with William B. Franklin’s Brigade of Samuel Heintzelman’s Division. Fanny was a favorite amongst the other soldiers within the camp for her tenderness and womanly deportment.

When it was time for the army to move south toward Centreville to make their attack at Manassas, Fanny was parted from her husband and returned to their home in Washington to wait for any news. On the evening of July 21st, she received countless

reports from strangers that James Ricketts had been wounded and killed. In reality, James had been captured with his artillery unit and was being held prisoner at Lewis House (also known as Portici) further southwest from the center of the fighting. He had also been breveted to lieutenant colonel, but that news would come later. It wasn’t until Lieutenant E. D. Baker, the aid-de-camp to General Franklin, brought Fanny her husband’s sword and the message: “Give this to my wife; tell her I have done my duty to my country, and my last words are of her and our child.”

This was later confirmed by Ricketts’ Junior Lieutenant Kirby when he told Fanny about his tireless, but fruitless efforts to find her husband’s body on the battlefield. For two days, she had accepted that her husband was one of the many to fall in the first major battle of what northerners called “The Rebellion”. It wasn’t until she received a telegram from General Wadsworth who had heard that James Ricketts was, in fact, alive. Only, he was severely wounded and a prisoner of war.

Fanny instantly acted. With the help of Captain (now General) Beckwith, of the su 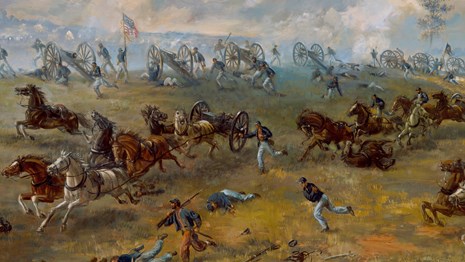 bsistence department, she procured a light carriage, drawn by two horses. Then, she petitioned to General Winfield Scott Hancock (a notable name for those who love Gettysburg) for a pass to get her through so she could find her husband. That, however, didn’t do her much good when she approached Confederate pickets.

Her reputation didn’t fail her here and she sent on word to an old comrade of her husband’s from their days on the Rio Grande. J.E.B Stuart was told of her arrival and like Scott, wrote her a pass to come through to Fairfax and no farther. Upon arriving, Stuart met her and had one condition upon her going any further to look for James. He wanted her to sign a note saying that she was not a Yankee spy and was genuinely only interested in finding her husband (dead or alive). Indignant and probably too tired to deal with that sort of nonsense when her husband’s life hung in the balance, she promptly tore up the note in front of him and proclaimed, “I am no spy, but the wife of a wounded officer, and I will go as your prisoner, but I will never sign this.”

Instead, she insisted that she be supplied with a pass and a guide to take her to General Joseph Johnston’s headquarters. Rather unwillingly, they did so and she was brought to Portici. What awaited her was just a taste of the ghastly nature of war. The house that was being used as a field hospital was still crowded with wounded Union and Confederate soldiers after the battle.

On Friday, July 26th, she wrote this in her diary:
“. . .Oh nothing, no words – and they are limited in this little diary – can describe the horrors around me. Two men dead and covered with blood were carried down the stairs as I waited to let them pass. On a table in the open hall a man was undergoing amputation of the leg. At the foot of the stairs two bloody legs lay and through it all I went to my husband. Outside the next door was a severed arm, and my clothes brushed by blood, cloths, splint, etc. I found my dear husband lying on a hospital stretcher still covered with blood!
God alone knows the horrors of this place…Downstairs there are some forty men in the various stages of death or possible recovery. Blood runs on the floors, the smell is dreadful but no language can describe it.”

She had Dr. Lewis of Michigan to thank for saving her husband’s life, along with several other men in the makeshift hospital. For two weeks, Fanny stayed with James and nursed him to the best of her ability. While she was there, Fanny took pity upon the other souls that lay suffering, and tended to them as well. The conditions in the field hospital were less than perfect, and she was subject to the same deprivations as the soldiers. Uncleanliness, poor food, short rations, and ill treatment from the Confederate guards were just a few of the trials she encountered.

On August 3rd, the order was given to evacuate all the wounded from Manassas and take them to Richmond. One of James’ wounds was still making his recovery doubtful. A ball had entered his left leg, near the knee joint, shattered the bone, and resulted in much swelling and pain that they feared the leg would have to be amputated in the end. Moving him might have agitated the wound even further. The surgeons insisted that the leg be amputated, but Fanny feared for his recovery due to the heat of the season and the jostling he’d receive on the way to Richmond. Wounded soldiers were known to die in the boxcars because of the uncomfortable ride that would worsen their condition.

Thankfully, Ricketts and his wife were given a hospital car and Colonel Wade Hampton and Major Webb of North Carolina brought ale and refreshments to the wounded officer and his wife. This afforded them some level of comfort and they faired better on the trip to Richmond than anticipated. However, that might have been the end of what kind of decent accommodations they could expect. In Richmond, the capitol of the Confederacy, the wounded were piled in the poorhouses. The shelters were inadequate and the food barely palatable. It didn’t help that citizens in Richmond heaped abuses upon the prisoners. One shining light came from sympathetic women who sent baskets of goods and food to Fanny and her husband. All the while, visiting surgeons continued to suggest amputation for the swollen limb and she refused, thinking the shock of the surgery would be too much for him.

For four months, this continued until the worst possible news came for Fanny. A messenger came in the night to report that Captain Ricketts had been selected as one of the thirteen officers of highest rank in possession of the Confederate government, as hostages for the thirteen privateersmen held in New York. He was to go to Libby Prison with the rest of the prisoners, and be liable at any moment to execution, whenever the rebel government might learn of the execution of their imprisoned sailors.

When James Ricketts’ name was read as one of those who would be indiscriminately executed, Captain Thomas Cox, of the first Kentucky volunteers, exclaimed at once, “What, that wounded man, attended by such a devoted wife? Let me go in his place!”

Fanny Ricketts wouldn’t throw in the towel so easily and wrote to one of the ladies who had been sending her baskets. The wife of Adjutant-General Cooper was moved to her plight and soon, a nullification of the previous orders were given. No wounded prisoners would be executed or held hostage, seeing that it might taint the favor of the Confederacy with Europe. At this time, the south was still trying to get France or England on their side as allies in the war against “northern aggression”.

In the final weeks of December in 1861, Ricketts’ exchanged officer finally arrived in Richmond and the devoted couple caught the first train to Fairfax. Fanny’s health declined during her co-imprisonment with her husband, but recovered by the spring of the following year when her husband received the commission of a brigadier-general, and was assigned to duty in McDowell’s corps, at Fredericksburg. And yes, he got to keep his leg in the end.

The war continued on for both James Ricketts and Fanny, but it certainly got a rough start at the battle of Manassas.