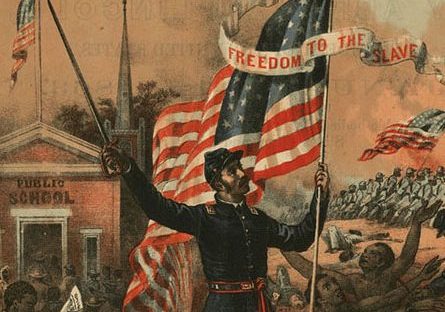 I’m taking this time out of my busy (and currently stressful) personal life to wish all my readers a Happy Juneteenth/Emancipation Day, which has its roots in Civil War history.

June 19, 1865, is the day most commonly associated with Juneteenth, as it was the day the Union army entered Galveston, Texas and General Gordon Granger proclaimed to the enslaved population that they were now free from bondage. However, emancipation came to many communities at varying times and under a wide array of circumstances.

Many, like the freedom seekers at Fort Monroe in 1861, escaped behind Union lines during the Civil War. Though they were considered “contraband” they were no longer enslaved under their former enslavers and there was hope for complete freedom with the Federals. Thousands upon thousands more achieved their freedom well before the firing on Fort Sumter when they escaped slavery and ran to states where slavery was outlawed. The Fugitive Slave Laws threatened to take away what they had risked everything to gain, the law becoming a controversial point that further divided North and South before the war. (side note: The Fugitive Slave Law as part of the Compromise of 1850 was intended to protect the property rights of the slaveholders, but invalidated the states rights of free states and did not appreciate federal intervention to appease the “Slave Power.” The argument of states’ rights was utilized by both sides.)

Then, there’s the Emancipation Proclamation that President Abraham Lincoln signed into action on January 1, 1863. This act, considered a military necessity, declared the enslaved of those areas in direct rebellion to the United States officially free. This did not include any slaves in the border states that were loyal to the Union, or any area that was already under Federal occupation. This executive order had a far-reaching impact on the war and society as a whole. Enslavers did all they could to prevent their enslaved from learning of the Emancipation Proclamation so as not to lose their labor force or risk an insurrection on their plantations.

Only the 13th Amendment, passed by Congress on January 31, 1865, and ratified on December 6, 1865, forever abolished involuntary servitude in America. The transition from slave society to a free labor society (free labor being the ability for citizens to work for themselves and have freedom of employment, while discouraging wage labor), was an immense struggle for the former Confederate states during the Reconstruction Era. Emancipation meant greater opportunities for black advancement in society, including education, property ownership, social mobility, and suffrage. The political, social, and economic changes brought about by the 13th, 14th, and 15th Amendments shaped the future of black Americans but full equality would still be a long time coming.

So, the question is, why June 19th to celebrate emancipation for American blacks when that was only one event that took place in Galveston? Tradition has a big role to play in this, but also because of the reasons listed above. There were MANY Emancipation Days, each one with its own context and meaning. Texas was the first state to create a Juneteenth holiday in 1980, and other states had their own unofficial Emancipation Day. It was only made a federal holiday when Congress passed The Juneteenth National Independence Day Act in June 2021 with unanimous consent. The act was first introduced by Senator Ed Markey, a Democrat from Massachusetts in 2020 in the wake of the George Floyd and Breonna Taylor murders, as a renewed protest against racial violence swept Covid-stricken America.

Whatever your opinions on current political and social events, the creation of Juneteenth or Emancipation Day is intended to recognize the first steps toward civil and racial equality. Any student of Reconstruction can attest that this first step was met with much hostility and turmoil, and any contemporary activist can say the world has a long way to go before racism is fully eradicated. However, Juneteenth is a day to recognize how far we have come as a people and a Nation. So today, I invite you to reflect on the influence of slavery and emancipation in America, how it changed our national identity over the centuries and how we can further acknowledge the struggles of generations of blacks who fought for their freedom.

Kelley Robin D.G. and Lewis, Earl, ed. To Make Our World Anew, Volume One: A History of African Americans to 1880. Oxford University Press, 2000.