The Civil War, like any major event in history, was packed with various types of propaganda. The definition of “propaganda” is as follows: “information, especially of a biased or misleading nature, used to promote or publicize a particular political cause or point of view.”

Let’s face it. We’ve all been victims or perpetuates of propaganda in one way or another. Social media is rife with the stuff these days. But how did people in the Civil War promote their beliefs and political values without the internet? It may be hard to believe for some youngin’s out there, but there was a time when people took a piece of paper and wrote letters to people instead of calling, texting, emailing, or DMing. It was really the only way (besides telegraphs if you could afford it) to communicate with anyone who didn’t live in the same town as you.

So, the manufacturers of stationary products jumped on the concept of marketing their postcards and envelopes to fit their beliefs. Many can be comical and similar to newspaper cartoons. Some can be graphic or allegorical. While I was visiting the Tulane University Special Archives, I found a decent stack of used and unused stationary that was made for just this purpose. They were primarily of a Union-slanted nature.  Take a look! 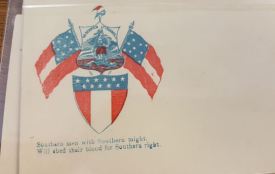