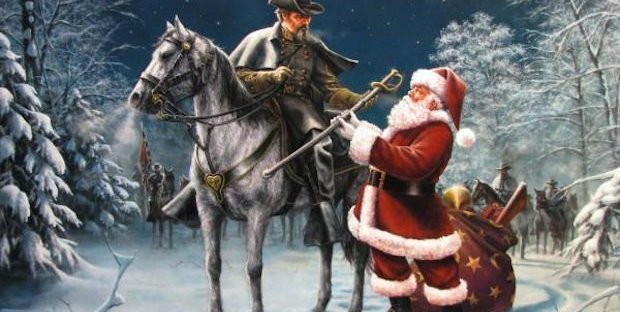 Merry Christmas and Happy Holidays from your historian at Belle on the Battlefield Blog!

Everyone has their own holiday traditions. Perhaps you’re visiting family you haven’t seen in a long time. Maybe you’re hosting a big dinner with your loved ones. If you have kids, I’m sure you’re having a blast watching them scream and giggle over their new toys. Or maybe you don’t have the chance to do any of that and you’re hanging out with close friends instead.

Whatever you’re doing, I hope it’s fun and you’re making memories that will last a lifetime. For the soldiers in the Civil War, Christmas was a very different experience. For many, enlisting in the war would be the first time they’d been away from home. Whether they were fighting for the blue or the gray, the sentiment was usually the same. They were missing home right about now. They would be missing the laughter of their friends and family, and the warm glow of a cheery fire. They would miss the feasts, the gifts, and the togetherness that comes with the festivities.

But war couldn’t stop the soldiers from doing what they could to bring a bit of the Christmas spirit to their camps. Most of the time, fighting would be put on hold for the winter season. Some exceptions were Fredericksburg and the battle over Knoxville, but Christmas Day was often observed and an armistice was called across the lines.

Trees of all types would be cut down and decorated within the camps. Rations were creatively prepared and sometimes (especially on the Union side) luxury rations were distributed, like champagne, turkeys, or other treats to supplement their meals for the holidays. Gifts made by hand could be exchanged between battle buddies. In the more northern reaches of the country, snowball fights broke out – much to the officer’s dismay as sometimes soldiers would be injured in the exchange or get sick from the cold. If picket lines were close enough, gifts might be traded between the soldiers clad in blue and butternut. Though it was difficult – sometimes impossible – furlough could be given to officers and privates to go home for the holidays, but not everyone would be granted leave. Scores of letters would be written home, lamenting over their absence but extending warm wishes to their families who were (hopefully) far away from the destructive reaches of the war.

Back home, charity drives marked this time of the year. Communities would gather together and raise money or supplies to send to the front lines. Those families who were without their fathers, brothers, sons, and uncles during the holidays might pay tribute to them in some sentimental way as having his picture (if they had it) set at the table during their dinners. Families would send care packages to their men, but most of the time the contents would spoil before arriving or be confiscated unjustly. Special prayers would be sent up for the safe return of their soldiers, and if they had already been lost, I’m sure more than a few silent tears were shed around the decorated tree and vacant chair.

But no matter how the traditions were continued, one thing remained unchanged whether at home or in the camps. Soldiers would sing their favorite holiday carols like Silent Night, Hark! The Herald Angels Sing, God Rest Ye Merry Gentlemen, or Deck The Halls. Those with any musical talent would pitch in with banjo, drum, harmonica, etc. What a concert it would have been along the Potomac or Rappahannock in those years.

More about Christmas during the war and colonial era: