The definition of memorial is stated as “something, especially a structure, established to remind people of a person or event. Intended to commemorate someone or something.”

Most often, this is put within the context of remembering someone who has died or something that was destroyed. It can be a headstone, a plaque, a cross on the side of the road, a simple stone to mark that spot where the deed took place. It can be a ceremony or a moment reserved for silence to remember what was lost. As we approach Memorial Day, I started thinking about the holiday a little more critically. Especially since I’ve been studying the Civil War. Memorial Day used to mean three-day weekends, barbeque, and family visits. As I grew older, it meant lots of sales in department stores and everyone saying “Happy Memorial Day”.

I was recently told this by a clerk after I made a purchase, and I actually had to stop and use some brain cells to figure out what exactly was so “happy” about a day when we are to remember the soldiers who would never come home. Now, don’t get me wrong, this is a time to be grateful and respectful of the fallen. But I don’t think “happy” is the right word. We should be thankful for their sacrifice to freedom and justice, fighting a war to make a difference in the lives of those back home.

It also got me to thinking about the origins of Memorial Day, and how they date back to just after the Civil War and even before.

The practice of decorating graves has been around as long as there have been any dead to bury. And the increased significance of the battle-slain was recognized even more. Flowers and preservation of headstones is typical. After the Civil War was no exception. The importance of finding meaning in the midst of the tragedy drove citizens and widows to make efforts to glorify the soldiers in a memorial fashion. Hence the monuments to regiments, brigades, and individual soldiers or generals. Cemeteries on both sides of the Mason Dixon line were organized and the dead reinterred from the battlefields.

This was easier to do in the north than in the south, where finances and legislature restrictions inhibited these efforts. You might have remembered in Gone with the Wind, the Association for the Beautification of the Graves of the Glorious Dead (that’s a mouthful if there ever was one). This sort of effort was implemented in the south. The United Daughters of the Confederacy made invaluable efforts in raising money and bringing awareness to the sacrifices of the “lost cause”.

Decorating these graves were often left up to the individual, but became a more widespread custom starting in 1866 and 1868. General John Logan, commander of the Grand Army of the Republic – a veteran’s group after the war – issued orders for the national observance of Decoration Day. “The 30th day of May, 1868, is designated for the purpose of strewing with flowers or otherwise decorating the graves of comrades who died in defense of their country during the late rebellion, and whose bodies now lie in almost every city, village, and hamlet churchyard in the land . . . It is the purpose of the Commander-in-Chief to inaugurate this observance with the hope it will be kept up from year to year, while a survivor of the war remains to honor the memory of his departed comrades.”

There are several earlier instances of the memorial practice in the south. One of the most noted and memorable took place in Charleston, May 1st, 1865, less than a month after the war was officially declared to be over. Freed blacks gathered at Charleston’s Hampton Park to pay respects to the interred Union prisoners of war. A parade of over 10,000 was held for those buried in a Confederate camp. They were joined by members of the community, but this was a one-time occurrence. Occupying Union soldiers in the north, especially in Virginia, held ceremonies at the national cemeteries, much as we do to this day. In 1868, memorial events were held in 183 cemeteries in 27 states, and 336 in 1869. Women on both sides, even during the war – such as just after the battle at Shiloh in 1862 – are said to have left flowers and cleared the weeds around the graves. Northern women would do the same for the southern soldiers, and vice-versa. Grief blurred the lines between north and south long before a cease-fire was declared. 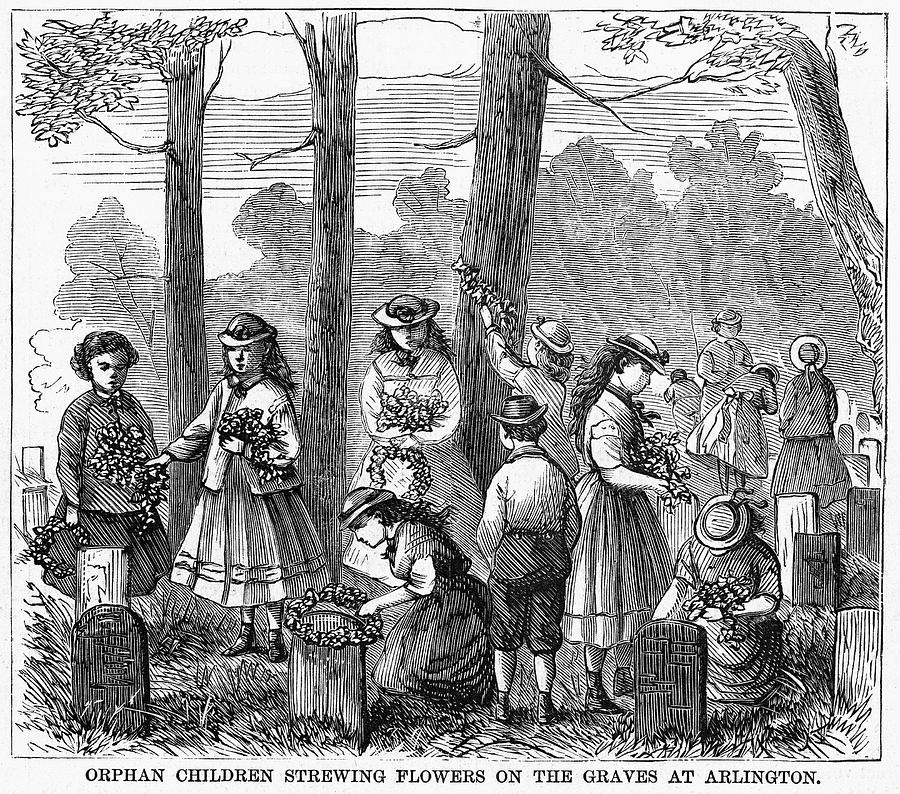 The need for an official Memorial Day was stated by many. One such cry came from a lady in Columbus, Georgia, and might have been the genesis of Confederate Memorial Day. Mary Ann Williams wrote an open letter in the spring of 1866 suggesting “a day be set apart annually” and become a “custom of the country” to decorate the graves of soldiers with flowers. “We cannot raise monumental shafts, and inscribe thereon their many deeds of heroism, but we can keep alive the memory of the debt we owe them by dedicating at least one day in each year to embellishing their humble graves with flowers.”

States across the country all adopted their own traditions in the form of speeches, parades, and cleaning up of the cemeteries. Each one also set aside their own day in spring for the event and made it official in their own state legislature over the decades to follow. Uniformly, Decoration Day (or Memorial Day) was celebrated May 30 from 1868 to 1971. In 1971, it was officially moved to the last Monday of May, under the presidential order of Richard Nixon.

As more wars came, especially in the early and mid-19th century, Memorial Day became less about those fallen in the Civil War, and more about those lost in World War I and World War II. Still, the holiday is meant for all soldiers who died in uniform throughout American history.

Frederick Douglass spoke these words to a large crowd at Arlington National Cemetery on Decoration Day in 1871: “We must never forget that the loyal soldiers who rest beneath this sod flung themselves between the nation and the nation’s destroyers … we are indebted to the unselfish devotion of the noble army who rest in these honored graves all around us.”

There’s some debate whether Confederate soldier lives should be honored alongside the Union, since they were not officially part of the United States and were not fighting for the same cause. However, even in the late 1800s, there’s a universal acceptance that the boys in gray were no less important or honorable than the boys in blue. Once the war was over and the Confederacy officially surrendered, they were all brought under the same banner again. They rejoined the United States and though Reconstruction did a number on the south, they were all considered Americans again. Therefore, in my humble opinion as well, those Confederates who died for their country and their own pursuit of freedom should be remembered with the same reverence as any other soldier.

Saving History Saturday: Memorial Day and Preservation in Their Words

“Strew the fair garlands where slumber the dead”