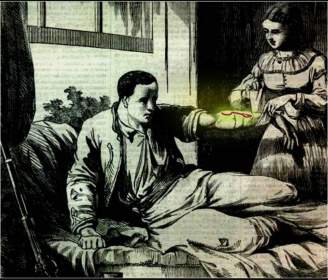 In researching for my most recent blogs regarding the experiences of soldiers at the Battle of Shiloh, an article continued to pop up that had me tilting my head. The headlines read “Angel’s Glow” and “Glowing Wounds at Shiloh”. At the time, I couldn’t stop to read through the mass of information about glowing bacteria, but I’ve gone back to give this a little more attention.
Yes, some soldiers at Shiloh experienced what would later be called “Angel’s Glow”. For some reason or another, while soldiers were waiting to be taken off the battlefield – usually waiting for an extremely long time – they noticed that their open wounds would begin to glow a faint blue-green color. I’d imagine that this probably freaked out the soldiers and doctors at the time, because it wasn’t often they saw something give off its own light source.

When the wounds were cleaned and dressed, however, a pattern emerged. Those soldiers whose wounds glowed, often had a better time recovering than those who didn’t. Their time spent convalescing was shorter and there were few post-operative complications. At the time, they simply attributed it to the mercy of God or angels (hence the name). This phenomenon went mostly overlooked as myth or exaggeration. Historians and scientists might have just assumed the wounded soldiers were hallucinating or spinning a war tale. This incident was not exclusive to Shiloh, by the way. It happened on a lot of other battlefields, especially ones where the dead and wounded couldn’t be collected right away.
However, it wasn’t until 2001 that a much more credible explanation was given. A seventeen-year-old student by the name of Bill Martin was visiting the Shiloh battlefield and was told the story of Angel’s Glow. Luckily, his mother happened to be a microbiologist who studied luminescent bacteria with the USDA Agricultural Research Service. Knowing that his mother was an expert in this, he went home to ask her if Angel’s Glow might have been a type of glowing bacteria instead of an act of supernatural healing. Like any good mother and scientist, she encouraged him to find out.
He grabbed his buddy, Jon Curtis, and they got to work.
Their hypothesis was proven possible.
It is believed that a little parasitic helped lurked in the soil of the battlefield and entered the wounds of the soldiers as they lay waiting for help.

A nematode is a parasitic worm that produces a bacterium called photorhabdus luminescens. What this worm does is burrow into insects and insect larvae and then regurgitate P. luminescens bacteria. The bacteria then gets to work on killing the host, along with all other microorganisms in the infected area. When this bacteria is at work, it glows a faint blue color. Once the host is dead, the worm feeds on the corpse and eats the bacteria it had sent out, which then re-colonizes within the worm to glow another day. The nematode lives in damp woodland areas, such as the land around Shiloh Church in southern Tennessee.
There’s one catch, however, in that the nematode cannot survive in a warm environment or host.

With the body of the average soldier being 98.6 – give or take a degree – the nematode would not survive to begin its feasts. No worm, no bacteria, no glow. BUT, the conditions at Shiloh were exceptional. It had been raining, it was early April in the central south, and cold. Soldiers who were left on the battlefield on the night of April 6th, 1862 would have been stuck lying in puddles or getting showered on. Also, when someone loses a substantial amount of blood, their body temperature can drop. Many soldiers, before they went into battle, discarded extra belongings such as heavy coats and extra blankets because it weighed down their march. Soldiers, though they might have had their knapsacks on them, wouldn’t have been able to protect themselves from the cold and rain.
These conditions could have led the soldiers to become hypothermic and their body temperature would drop. The first stage of hypothermia begins around 95 degrees, where the sufferer is awake and shivering. The second stage is around 89.6 degrees. As their condition worsens, their temperature will drop, and their festering wounds now become a prime target for the nematodes to attack.

But, the nematodes aim to kill their host, right? The soldiers would have been even worse off for the Angel’s Glow, not better. Wrong. Yes, the body temperature drops, nematodes come in from the soil, inject the bacteria, GLOWING BEGINS, then the bacteria works hard to kill the other microorganisms in the wounds. Gangrene can’t set in, nor will any other infection created by the wound. This helps to increase the soldier’s chance for survival. Also, the immune system of the nematode’s prey of choice isn’t nearly as advanced as that of a human’s. The bacteria and the nematode would have been killed by two things before the final stage of its assault. The host’s immune system, and the warming of the body once it was brought to a hospital. By then, the miracle was done, and it’s a good thing too because contemporary medical practices of the time weren’t fantastic in the way of disinfecting. The nematodes and their glowing bacteria may have saved the lives of many soldiers.
Like the aurora borealis sightings at Fredericksburg in late 1862, the glowing bodies of Shiloh can be easily explained by science and good detective work.
Oh, by the way, Bill Martin and Jon Curtis won first place in the team competition at the 2001 Intel International Science and Engineering Fair.